You’ve probably heard the chatter, too, as we have, that a recession may be just around the corner. Indeed, large enterprises appear to be preparing for a downturn in the U.S. during the second half of the year, growth has slowed in Europe and China, and concerns of a broader, global slow-down remain. 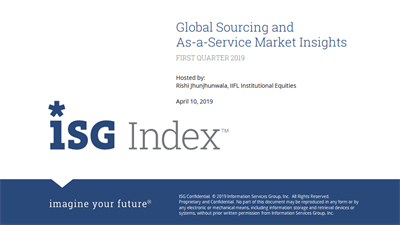 That may impact traditional sourcing levels, but it won’t be a brake on the growing demand for cloud-based services such as Infrastructure-as-a-Service (IaaS). The move to the cloud is inexorable, and as we’ve said before, we’ve reached the tipping point for digital business transformation. In our view, the tailwinds of digital are stronger than the headwinds of global macro-economic forces.

The latest results from the Global ISG Index™ bear that out. In the first quarter of 2019, annual contract value (ACV) of the combined global sourcing market – both traditional and as-a-service – hit a record-high of $13.5 billion, powered by a 26 percent growth in cloud services.

Having been through a downturn in the past decade, companies know what to expect, and they may respond differently from the defensive stance many took 10 years ago during the Great Recession.

To prepare, some companies are changing their objectives and focusing their IT initiatives to accelerate efficiencies and gain cost savings, which they are reinvesting in digital transformation. Digital technology is becoming the way a company makes money, not just how it saves money. Think platform services and apps that are radically changing the customer experience and opening new growth opportunities.

This bodes well for one segment of the market in particular, IaaS, which propelled the as-a-service market above $6 billion this quarter for the first time. IaaS increased 37 percent in the last year, while Software-as-a-Service grew only 1 percent year over year.  Application development and maintenance (ADM) services, meanwhile, rose 7 percent last quarter, reflecting growth of the app economy.

Still, don’t expect traditional sourcing to fade anytime soon. ACV this quarter climbed above $7 billion, up 2 percent, continuing a streak of seven consecutive quarters at or above $6 billion.

Scale matters as service providers expand their capabilities into digital technologies. Mergers and acquisitions have made headlines in recent months, with most of the more than 200 acquisitions made by providers last year done to stretch their digital skills.

In the Americas, as-a-service ACV accounted for more than half of the combined market, a first for that region. Even so, the market stalled somewhat by edging up only 1 percent over its strong finish in 2018. Traditional sourcing dropped 16 percent this quarter. As is true in all three regions, IaaS was the main driver of the as-a-service segment, rising 39 percent, compared to the 2 percent increase in SaaS.

Europe, meanwhile, seemed to shrug off Brexit uncertainty and continue its accelerated push to go digital. Traditional sourcing has long dominated this market, but as-a-service is fast catching up. In the latest quarter, the region achieved a new record of $4.9 billion in combined sourcing; traditional sourcing was up 24 percent, and as-a-service sourcing rose 21 percent. IaaS gets all of the credit for as-a-service growth, with a 33 percent jump in ACV, while SaaS slipped by 4 percent.

In the smallest sourcing region, Asia Pacific, the combined market reached $2 billion, one of the stronger quarters on record. Traditional sourcing rose 34 percent, and as-a-service ACV, which enjoyed a 33 percent increase, is now two-and-a-half times what it was just two years ago. IaaS powered the segment with a 37 percent jump, making the 14 percent gain in SaaS pale by comparison.

Industries can no longer sidestep digital transformation, and many have gone all in. Some are further along their digital journey, such as banking and financial services, whose players consider technological innovation imperative to meeting customer demands for personalization, security, payments and mobile banking. Utilities, too, are investing in technology to meet customer expectations for immediate communication in a power outage and for cybersecurity.

Although some dark economic clouds may be moving in, our long-range forecast for the global sourcing industry is bright and sunny. We are sticking with our 2019 forecast for as-a-service to grow 25 percent, but we are a bit less optimistic about traditional sourcing, given the macro-economic headwinds. We are thus revising our annual growth forecast downward from 4 percent to 3.2 percent.

To get a fuller picture of current market dynamics, including the growing demand for the as-a-service model, view the 1Q19 Global ISG Index presentation slides, news release and infographic on our ISG Index webpage.

Steve Hall is responsible for the firm’s Europe, Middle East & Africa region, as well as its global Digital Advisory Services business. During his time with ISG, Mr. Hall has led some of the company’s largest and most complex engagements with clients as diverse as United Airlines, Symantec, BP, World Bank, CEMEX and Motorola. He is a seasoned professional who brings considerable experience in emerging technologies to ISG clients. Prior to his position at ISG, Mr. Hall held senior roles at a number of renowned IT services companies, including Unisys and MCI. He also led large-scale eBusiness initiatives for technology solutions providers C-Bridge and CBSI and gained deep outsourcing and offshore software development experience as a delivery executive with Covansys. Mr. Hall co-authored Managing Global Development Risk: A Guide to Managing Global Software Development. He earned his degree in Computer Science from Regis University.