Modernization is the pervasive outsourcing driver for 2018 and going into 2019, and for most enterprises, modernization means more cloud. Modernization was the clearest and strongest theme found in analyzing outsourcing activity in dozens of countries as we prepared the 2018 ISG Momentum® Geography Report, and cloud-based services are the most commonly pursued means for attaining modernization. Outsourcing penetration reached an all-time high during the year.

Digital transformation is also a major and pervasive outsourcing driver. It involves modernization of both IT systems and business processes, and often entire business models. While cloud services for infrastructure, application delivery and business services are common in digital transformation programs, enterprises are looking at a broader set of technologies and services to help them change. Enterprises frequently seek help from service providers to understand whether artificial intelligence, robotic process automation (RPA), Internet of Things (IoT) technologies, blockchain, IT automation, DevOps and new ways of applying analytics can help their organizations. There are many pilot programs occurring for these and other technologies. These pilots do not always make a major impact on market spending data, but many will eventually have a strong influence on how business gets done and how services are delivered.

In 2018, outsourcing activity has been consistently solid in all major regions. ACV declines flattened in 2018 and, through the first three quarters, every region was within at least 85 percent of its 2017 total. The chart below shows regional ACV changes over the last decade and also offers perspective on the relative market size for each region. For example, outsourcing ACV in Europe in 2017 was $41.6 billion, more than the total of the other two largest regions, North America ($24.4 billion) and Asia Pacific ($14.1 billion). 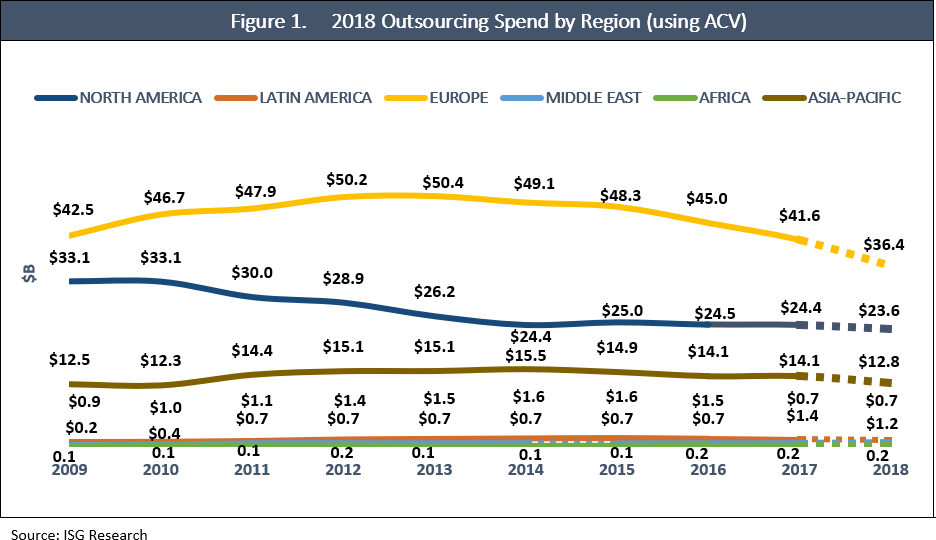 Figure 2 shows the year-over-year global ACV total since 2009. ACV fell 4 percent in 2017 and 5 percent in 2016. Before that, the annual ACV total had not changed by more than 3 percent for five consecutive years. Through the first three quarters of 2018, the ACV total was within 9 percent of the entire previous-year total, so a strong fourth quarter could push the global market to growth. That is also true in many individual countries. 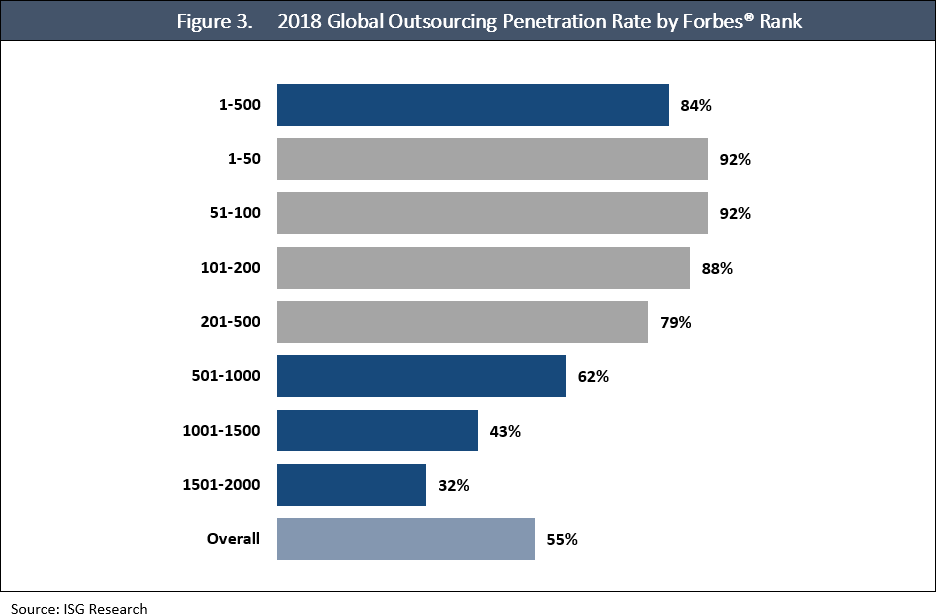 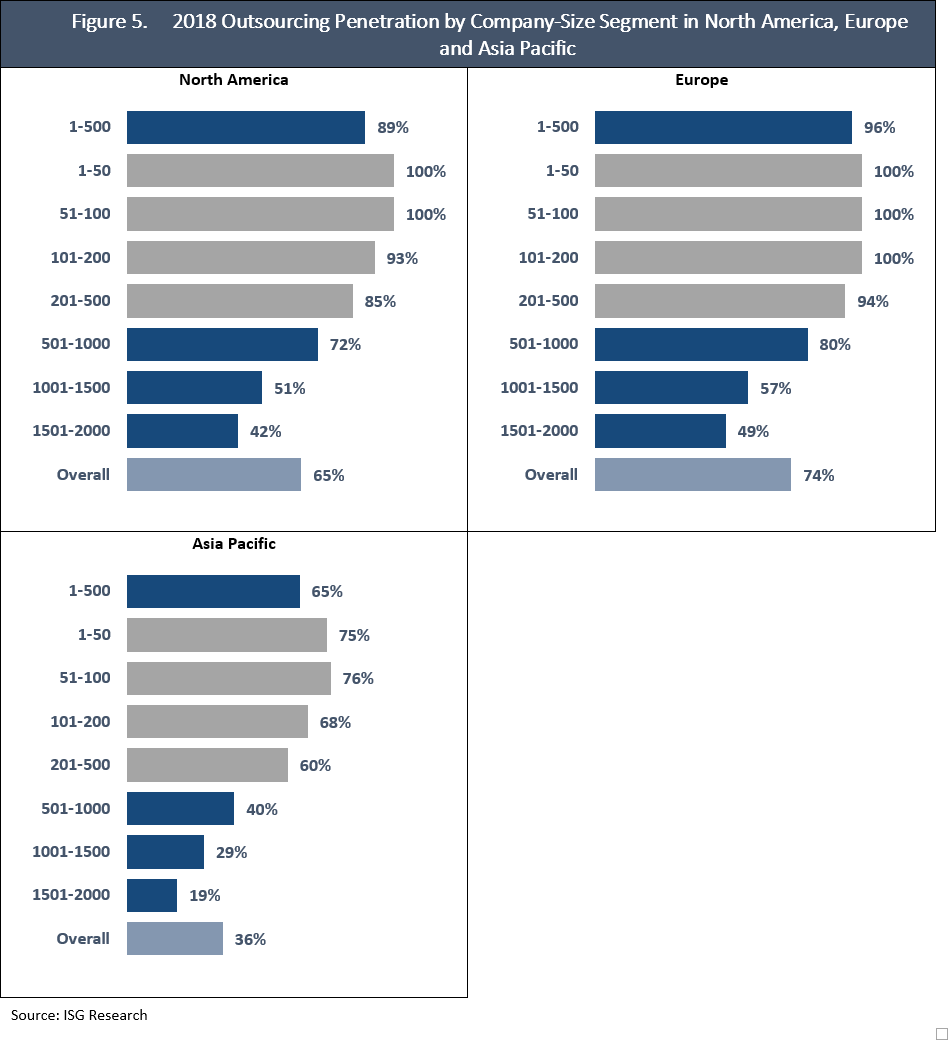 The average annual ACV among all current outsourcing clients in the G2000 is $68.2 million, but that varies considerably by company size (see Figure 6). The average spending disparity is a reason why the number of large companies in a country is a key indicator of the country’s market potential. As outsourcing engagements have been trending toward cloud-based agreements that are more limited in scope and duration, average and overall spending levels have been declining.

Nevertheless, client penetration is not deep for most BPO service lines (Figure 8). Other than industry-specific services, no BPO service-line category has been adopted by more than 18 percent of G2000 clients. The ITO market also has tremendous new business opportunity, despite the prevalent use of ADM and hosting services. 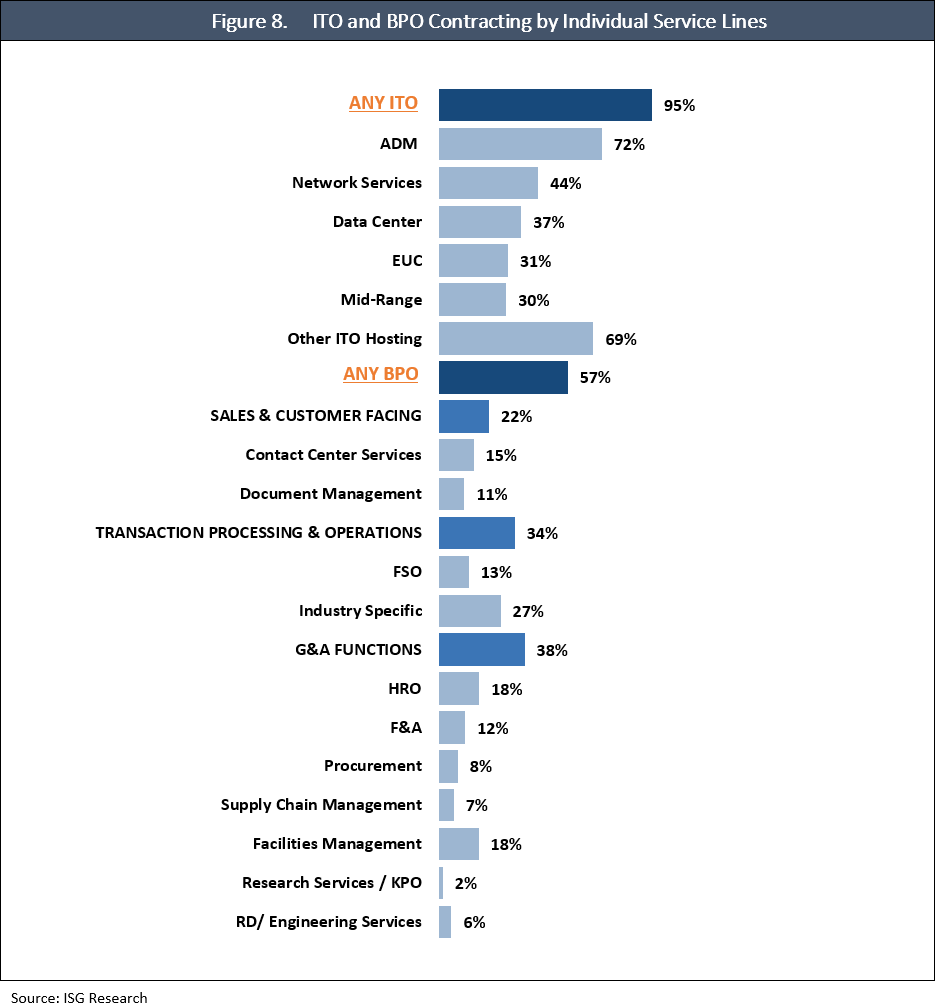 The table on the next pages (Figure 9) provides a snapshot view of market status and opportunity. It lists the 2018 ACV level in the first three quarters by region and for major countries (some small-market countries are excluded from the listing to save space but are counted in the regional totals). It also includes their number of G2000 companies, the outsourcing penetration rate among those companies and their average annual spending level.

In the first three quarters of 2018, there were 15 countries that had at least $1 billion worth of ACV for active outsourcing contracts. Nine of the 15 top countries are in Europe, which also accounts for six of the top eight. Country-level penetration rates can be a misleading indicator of market strength because the rates can be easily skewed in countries without many G2000 companies. Similarly, the average per-company ACV provides some context about outsourcing habits and maturity, but average spending is more influenced by a company’s size than by its geography.

Reinventing Bank Branches of the Future